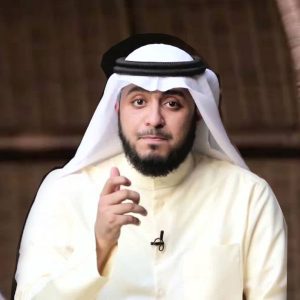 He studied Quran since he was a kid, and participated in many Quranic competition, and he took the first place in most of them. He studied science education at the university and worked as an Imam in many mosques inside and outside his own country. He has many activities which combines between advocacy work, media production and TV presentation in a number of religious program.

Al-Kandari was born in 1982, June 28th, in Kuwait. He loved the Quran and learnt its rules and techniques at an early age, and he was able to learn the whole of it by heart at the age of 15 under the supervision of Sheikh Rashad Ibn Muhammad Sayed Ahmad `Alam. In the meantime, he had the opportunity to lead the prayers in Al-Hay Mosque, and then moved to Al Amir in Yarmouk in 1999 and Alkulaib Mosque in 2001. His career as an Imam was extended outside his country, more specifically in Qatar where he led the prayers in Mohamed Ibn Abdelwahab Mosque during the Month of Ramadan in 1433/2012.

In Parallel with his preoccupation as an Imam, and after being graduated from the faculty of education in Kuwait, he held a number of positions and responsibilities, as he set up “Forfrem” company in 2012, beside his nomination as ambassador for the group (Qatar Charity) in 2013. In addition to that, he worked as a general supervisor for a program entitled “Halaqat assawt annadiy fi mobrat almotamayizin” in 2014, he also has worked as an official Imam since 2000, and his first recording was for the Quranic Chapters (Al-Isra, Al-Rahman, Al-Haaqqa) which was outstanding, and got the audience’s Approbation.

From a media and a marketing perspective, Sheikh Fahd Al Kandari has broadcasted a number of Television programs, “Bel Quran Ehtadayt”, he also provided a TV program “traveler with Quran” on Ar-Risalah Channel in 1434, and the list is longer. In addition to that, he participated in a variety of TV Religious programs and he was able to win the international competition of the Quran in Kuwait.