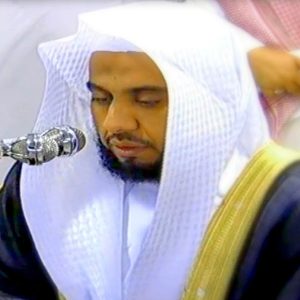 His voice is sweet, and his pronunciation is well adjusted. He grew up in a conservative entourage, and he loved the Quran, as a result he learnt it by hear at an early age, he was specialized in Quran Reading, and carried on his studies in Quran Sciences. He possesses many audio-video of Quranic recordings which confirm his talent and his technical expertise in reading the Quran, not to mention his melodious voice, we’re talking here about Abdullah Ibn `Awad Ibn Fahd Ibn Ma`youf, Ibn Abdullah Ibn Mohammad, Al Juhani.

He was born in Medina in 1976, among a conservative family who did very well in educating him, as a result he had an affinity to Quran and was able to learn it by heart at an early age, and he participated in a number of competitions. At the age of sixteen, he won the first place in the global competition of reading the Quran which was hosted in Mecca. As part of his commitment and Interest in the Holy Book, he carried on his post-graduated studies at the College of the Quran in the Islamic University in Medina and obtained a bachelor degree.

The professional and personnel experience of Abdullah Al-Juhani allowed him to occupy a number of positions and responsibilities, specifically in leading prayers, as he was able to lead prayers in his twenties, in Qiblatain Mosque In Medina for 2 years, Qiba’ for 4 years, and the Grand mosque in 1426. In addition to that, he was nominated as a member in the educational department at Muslim Faculty in Medina. He showed a great mastery of the Quran technique in this period, and as result, his way of reciting was acknowledged by a number of experts.

Thanks to his strong voice then, and the great passion for recitation of the Book of God, Al-Juhani did his best to study Quran science in the university, and he’s currently preparing a PHD in Um Al Qura University in Mecca.