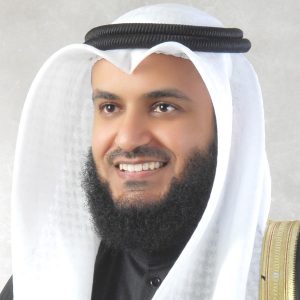 He studied Quran in the College of the Quran and Islamic Studies at the Islamic University of Medina ( Kingdom Of Saudi Arabia), in specialization ‘the ten readings and translations of the Quran’. He has read the Quran to Sheikh Ahmed Abdul-Aziz Az-Zayat, Sheikh Ibrahim Ali Shihatah As-Samanody, and the Sheikh Abdul-Rafi` Radwan. He impressed number of great scholars of Quran.

Sheikh Alafasy is he Imam of Masjid Al-Kabir (Grand Mosque) in Kuwait City, and every Ramadan he leads the Tarawih prayers in this Mosque.

Alafasy has two Space Channels specialized in the recitation of the Quran. Sheikh Alafasy is married and has two daughters. He’s also nicknamed Abu Nora.