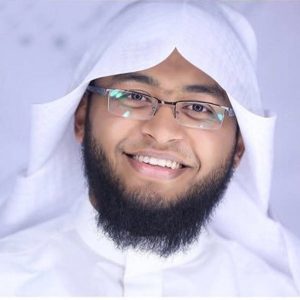 Sheikh Ibrahim Bin Sa`id Bin Hamad Al-Dosari is a famous Quran reciter, who was born in 1965 in Riyadh, Saudi Arabia, and who received his education in the schools of Riyadh. He was formed in “Al Imam Muhammad Bin Saud’s” Islamic University, in the faculty of “Ousul Eddin”, in the Quran and its sciences department in Riyadh. He received his bachelor degree with honors “very good” in 1986, and his masters degree with honors “Excellent” in 1991; and in 1994, he obtained his doctorate degree, first class honors.

Sheikh Ibrahim was certified by the “seven readings” and the “ten readings” according to “Alsh-Shatibiyah”, “Al Durra” and “Al Taiba” in several Quran closings under the supervision of multiple Sheikhs.

Ibrahim Al-Dusari worked as a teacher in the ministry of education, in the “Quranic memorization” middle and high school in Riyadh, 1986. After that, he moved to the ministry of higher education, where he was appointed as a researcher in “Al Imam Muhammad Bin Sa`ud’s” Islamic University, in the Quranic department in 1987, then as a lecturer in 1992, then as an assistant professor in 1995, and then as a professor in 2005.

In addition to that, Sheikh Ibrahim held several positions on numerous boards and committees. He was appointed as a member in the “commission of Quranic readings diploma curriculum” in the faculty of “Ousul Eddin” in 2000, and as a member in the “commission of Quranic readings path curriculum” in “Al Moualimin” Universities in 2001. Moreover, he was a member of the “Islamic council” in “Al Imam” University for two years since 2003, and he was also a contributor in the founding committee of the “Saudi Islamic association of the Quran and its sciences” in the same year, then a member of the supreme council of the Quran memorization charities.

He is currently an Imam and a preacher in “Al Amir Muhammad Bin Abdullah Al Sa`ud’s” mosque in Riyadh since 1983.

Sheikh Ibrahim wrote several books about the Quranic recitation, its interpretation and its sciences, such us: “Al Imam Mutawalli and his efforts in the science of Tajweed”, ” The explanation of Al-Mouqadimah Al Jazriyah“, “features of the educational interpretation of the Quran”, “Dictionary of the Tajweed and readings sciences”, etc…

He also recorded Quranic closings according to Warsh `An Nafi’s recitation method in the “king Fahd complex for the Quran printing”.