Reading of Khalaf from Hamzah by Abdul-Rashid Sufi

Reading of Khalaf from Hamzah by Abdul-Rashid Sufi 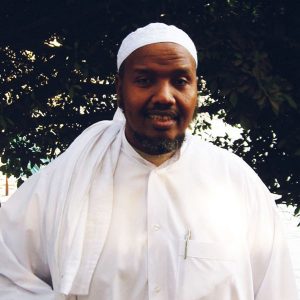 Sheikh Abdul-Rashid is a Somali Quran reciter. He was born in 1964 to the reciter and preacher Ali Abdul-Rahman Sufi, who did a lot for the Quran recitation in Somalia.

Abdul-Rashid Ali Sufi’s father has also taught numerous theologians. He built many schools and institutes for teaching and learning the Quran. He founded the famous mosque of Mogadishu which was called Al-sheikh Ali Sufi Mosque.

Sheikh Sufi first learnt the Quran at the mosque and finished memorizing it at the age of ten. He certainly owed to his father many of his skills. He taught him different recitations and the interpretations of the Quran and the Fiqh.

Back to Somalia, Abdul-Rashid Ali Sufi started teaching and led prayers in his father’s mosque. He then toured many Arab countries to teach the Quran’s sciences. He taught in Egypt, Qatar where he was nominated imam and preacher of the Anas Ibn Malik’s Mosque in Doha.